Dr. Ward grew up in Amherst, Ohio, and is thrilled to be practicing optometry near his hometown. He is a graduate of St. Ignatius High School and earned his Bachelor of Science in Pre-Medicine 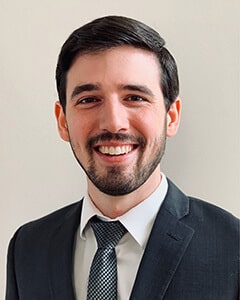 More about Dr. Eric Ward at the Cleveland Eye Clinic

While at Ohio State, Dr. Ward was involved with several community outreach programs, including the Lion’s Club, which helped collect and redistribute donated glasses to those in need. In addition, Dr. Ward took special interest in externship rotations involving the medically underserved, addicted, and homeless populations. He also enjoyed working with veterans at the Cleveland VA Medical Center, as well as with children through Ohio State’s school screening program and various pediatric clinics. He is excited to continue providing quality care to patients of all demographics but especially loves seeing families.

Dr. Ward’s style of practice is centered upon empathy and compassion. He greatly values and enjoys establishing relationships with his patients and feels that strong communication is the foundation of quality care. He strives to work as a team with each patient and involve them in their healthcare experience as much as possible.

Dr. Ward and his wife, Kristen, have known each other since preschool and they have a beautiful daughter. He is most passionate about his family and, when not practicing optometry, can be found around the fire spending quality time with his family, on the golf course, or cheering on the Notre Dame Fighting Irish.

Cataract patients now have an option to see at both near and far distances after cataract surgery! NEW multi-focal IOL technology can now decrease dependence on glasses after surgery.

We Are A Proud Partner Of